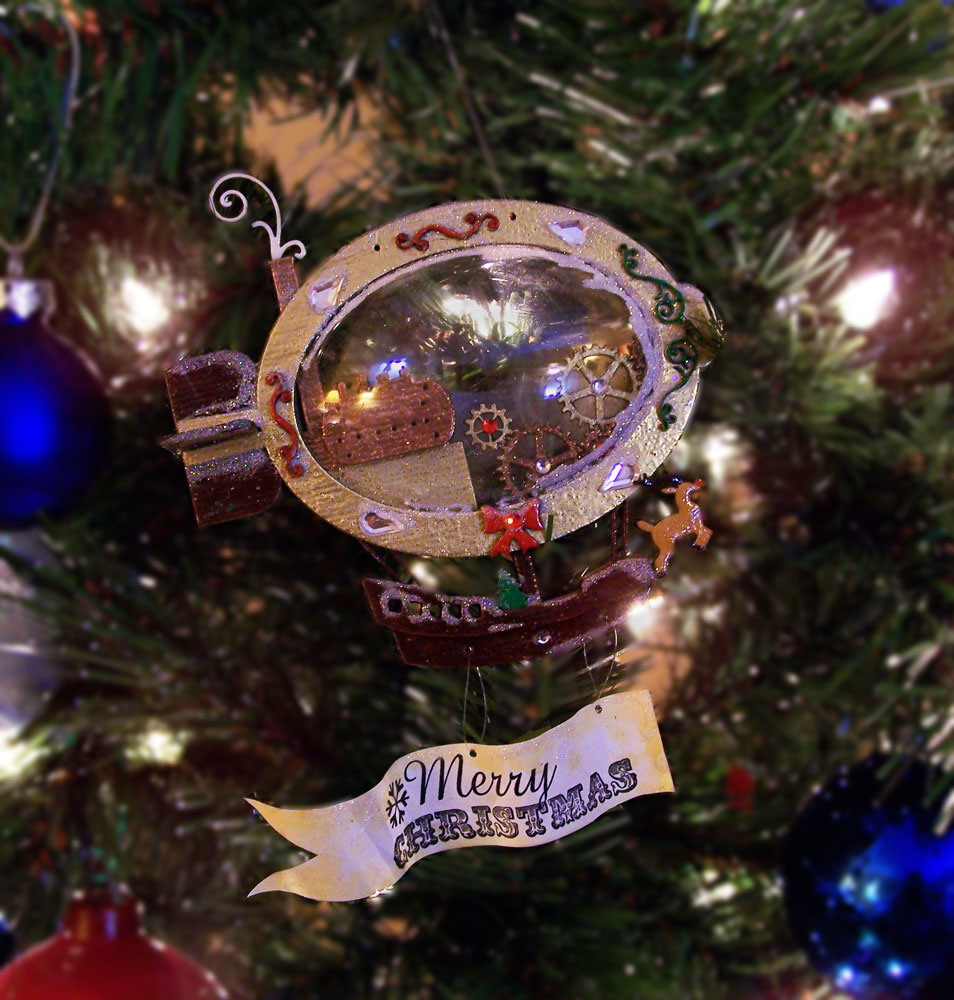 Every year I try to find a new ornament to place on our Christmas tree and add to our collection. I love finding different and vintage style ornaments, and if it is handcrafted all the better! Which brings me to the Globecraft and Piccolo Airship kit. I know many of you don't think of airships when Christmas comes to mind but I thought why not have a special airship just for Santa!

Carefully I removed the Airship and all of the accents from their backing. I started coating the boat portion and fin of the airship with 3D Enamel Burnt Umber. Let dry and then coated the reverse sides. 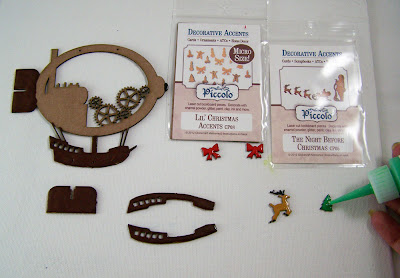 I applied 3D Enamel Gel Leafy Green to the mini tree and 3D Enamel Napthol Red to the bows. The reindeer got coated with the 3D Enamel Yellow Ochre and then the antlers and hooves with 3D Enamel Mars Black. 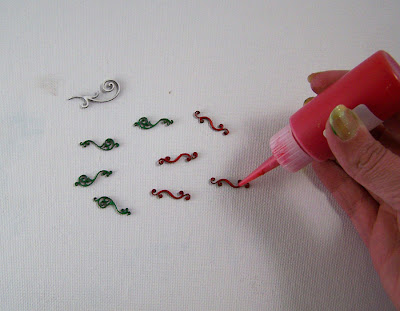 Carefully I coated four flourishes with 3D Enamel Gel Leafy Green and four with 3D Enamel Napthol Red, one flourish with 3D Enamel Titanium White. All of these elements will be used later to decorate the airship. You might have noticed I did not use all of the flourishes that came in the packs for this project. Any Piccolos I don't use right away get saved for other projects. :) 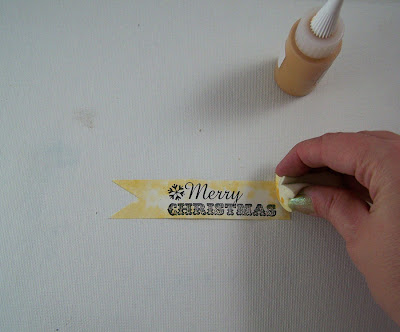 I used a Christmas stamp on cream colored paper and cut it out in the shape of a banner. Using a cosmetic sponge I applied 3D Enamel Yellow Ochre around the edges back and front of the banner and let it dry. 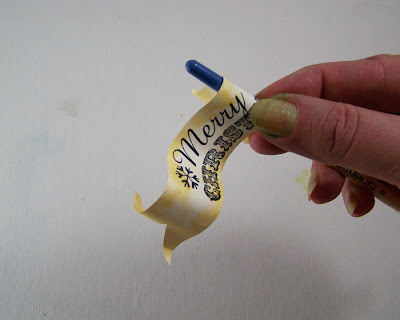 Using the handle of a paint brush I curled the banner to give it the effect of movement. 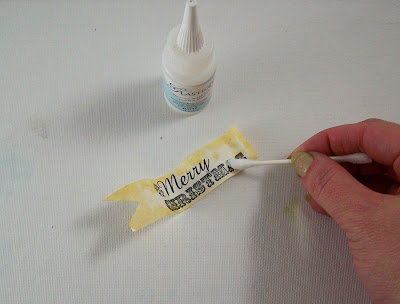 I then coated the front and back of the banner with Glastique Matte Finishing Glaze and let dry. 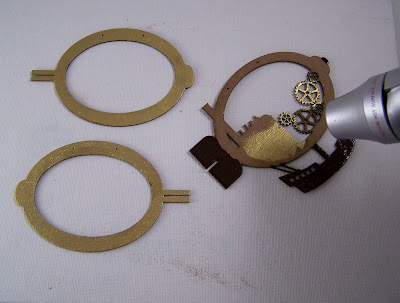 I applied Embossing Powder Adhesive to the airship outer rings, the engine base and a few of the gears. Then I coated them with 24K Gold Enamel Powder and heat to set. I also applied the same enamel powder to the other side of the engine. Embossing Powder Adhesive was then applied to the engine and the last remaining gears. On went a coat of Copper Kettle Enamel Powder and heat set. I repeated this for the other side of the engine. 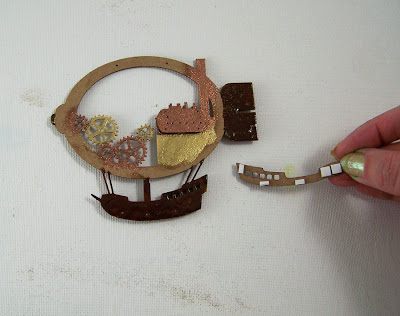 Using Mini Adhesive Foam squares I attached the outer boat and engine elements to both sides of the airship. 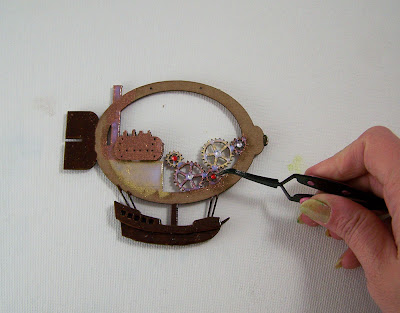 A thin coat of Glastique Gloss Finishing Glaze was then applied to the engine compartment on both sides and small sticker gems were added to the gears. 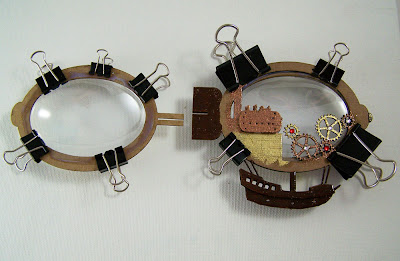 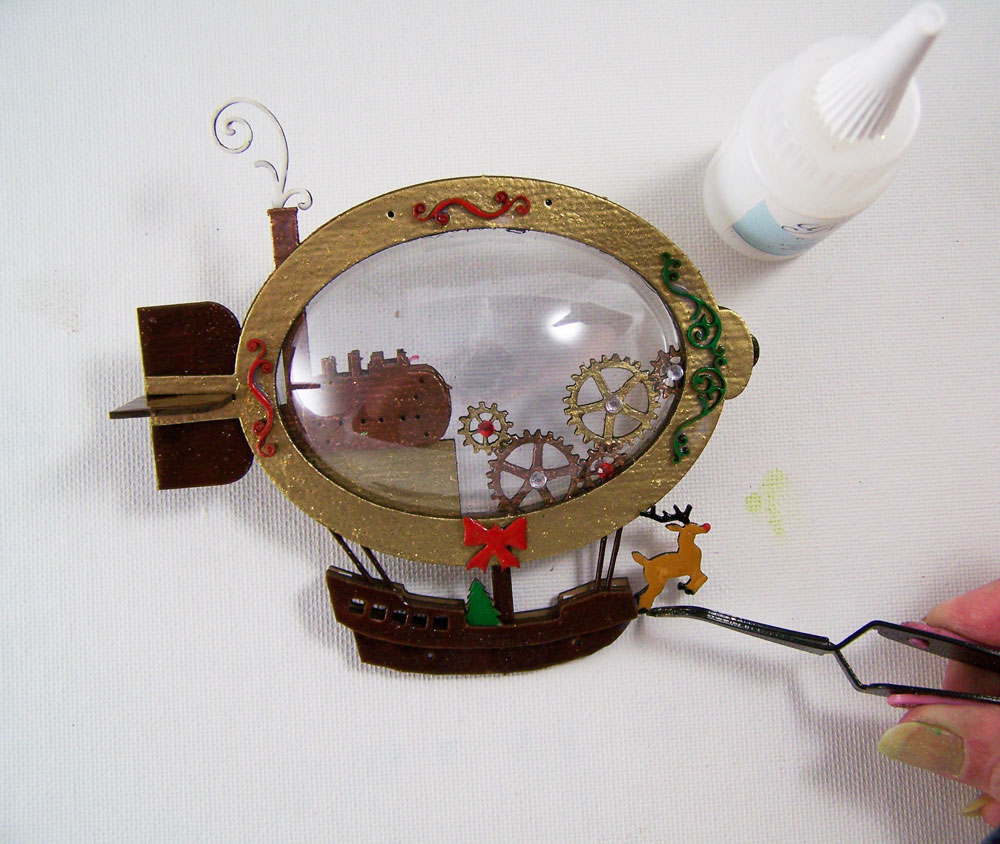 The now-dry flourishes and sticker gems were attached to both sides of the airship with Glastique Glaze. 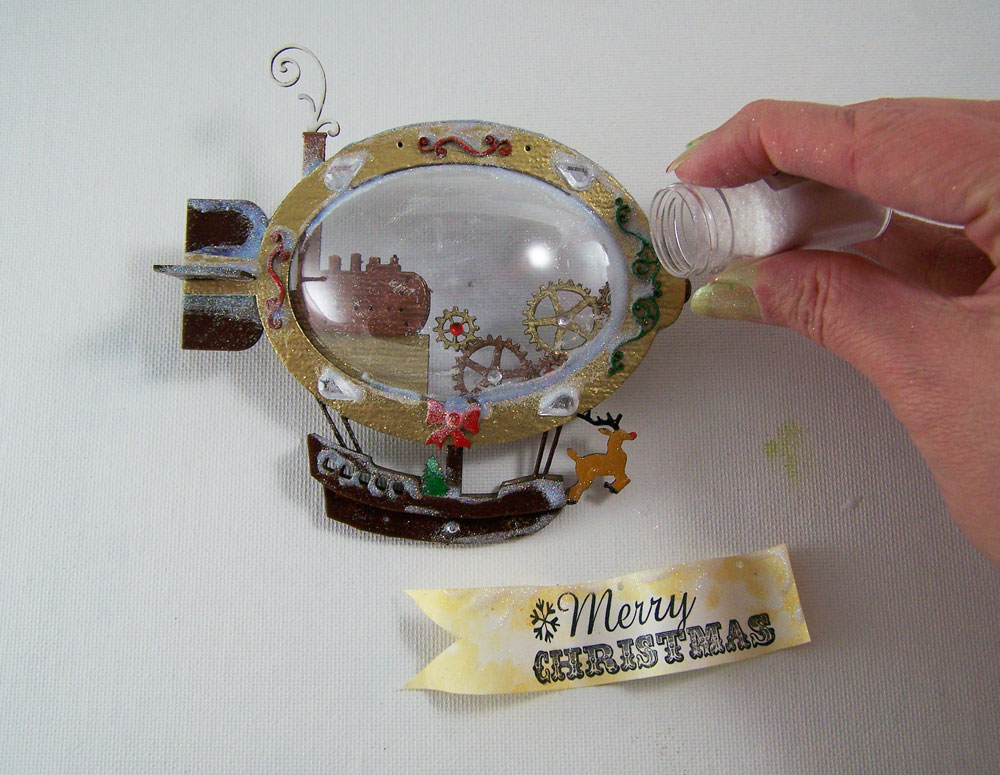 I applied Glastique Gloss Glaze on the right side and edges to the airship and sprinkled Micro fine Arctic Glitter on top. Once dry I attached the banner onto the airship with fishing line and added a loop on top to hang it on the tree. 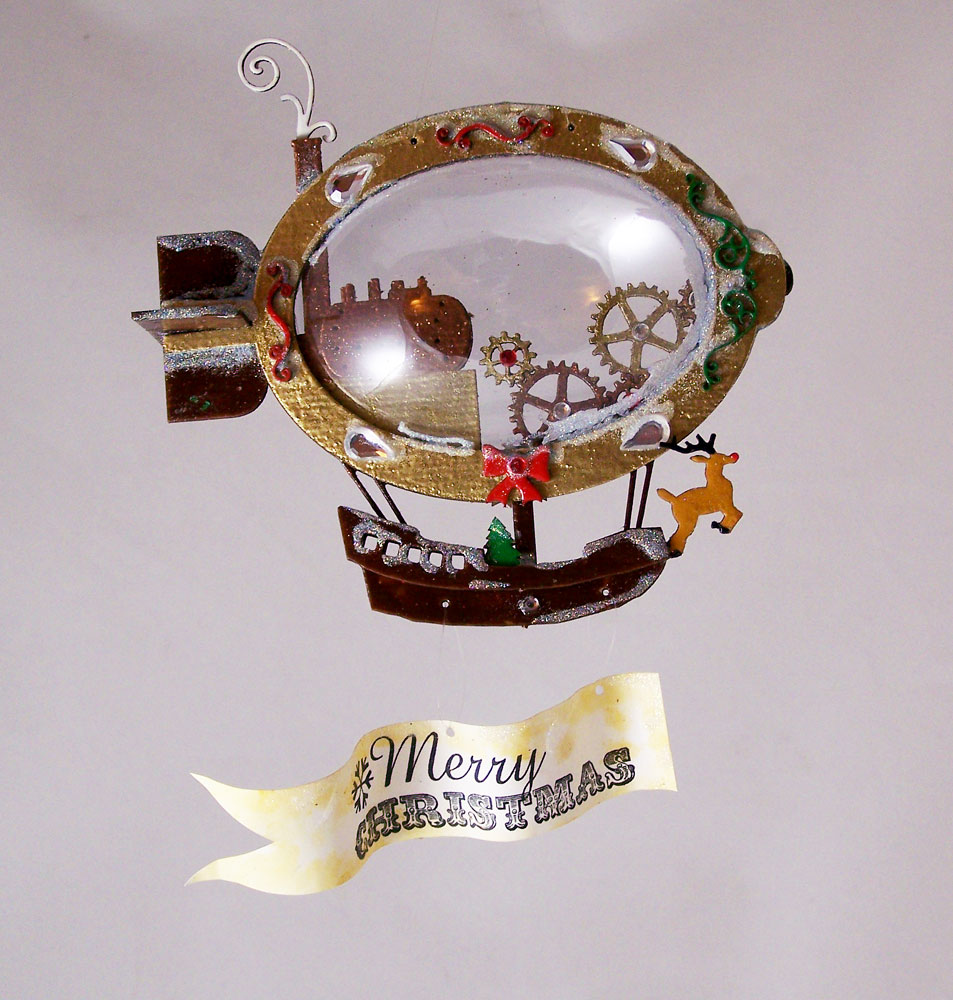 Jump on over to my blog Art Resurrected today for a Mushroom Ornament tutorial! 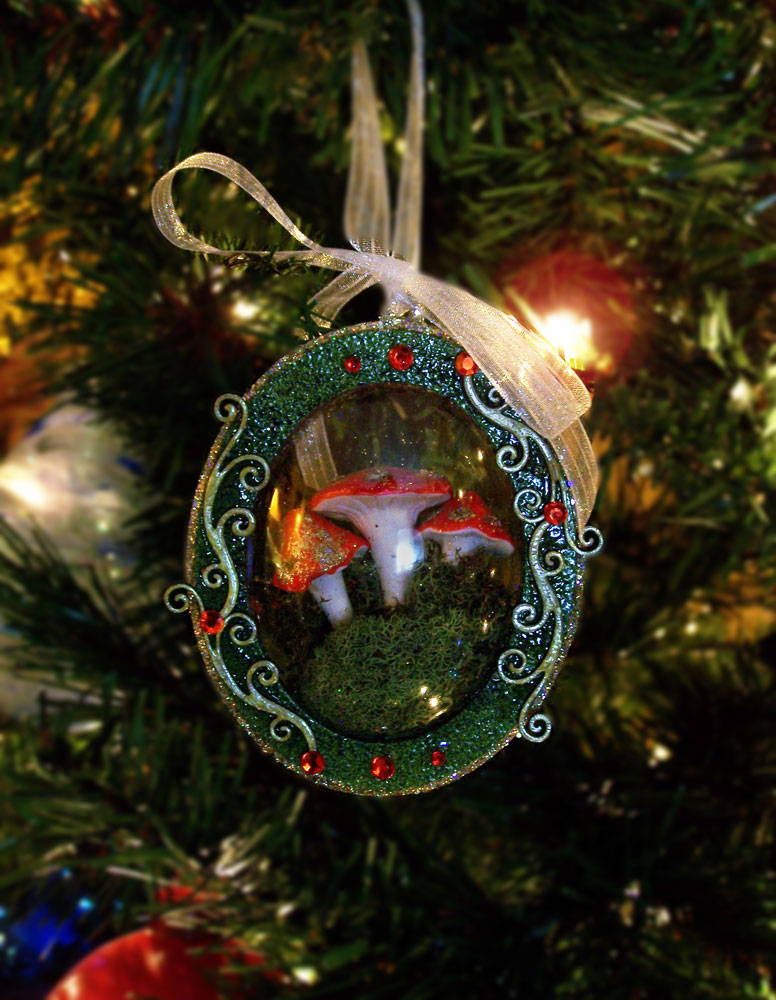 Until next time, Safe Travels!

Posted by Stacey Adams, SweetStamps.com at 8:42 AM

This is crazy cool! The 3D Enamels look great on those tiny pieces and I love the way the Santa and reindeer were incorporated.

SOOO CUTE! I LOVE this, just beyond adorable. I want one for my tree.

Adorable! I love this idea. I was going to make one as well! Great minds think alike...and are all on the G/P design team! LOLOLOL!!!

Thank you everyone. :) The airship kits are one of my favorite Globecraft products. I have been thinking of making a airship ornament for some time but I wasn't sure how to go about it. Once I tested the the mini airship on the tree and found out it was perfect size for an ornament, my mind was a whirl from there.

this is just amazing! My hubs would have a fit for one of these on the tree!

There's still time to make him one!